Born Marie-Louise Roosevelt Butterfield in Ghent in 1889, she was the only child of Lord Frederick and Lady Butterfield of Cliffe Castle Keighley, Yorkshire.

From the early years at art school in Paris until her death in 1984, she worked with a range of contemporary media including pencil, crayon, pastel, watercolour and oil.

Her childhood was spent in Oxford where her parents moved in the highest artistic and intellectual circles.  In 1905, the family moved to Paris and Frederick determined that his daughter should study art as it was apparent that she had the talent.  Marie-Louise was enrolled at the Julienne School of Art in her early teens.

During the formative years of her studies Marie-Louise worked entirely in pencil. Portraits from this time display a remarkable technical ability and sensitivity for such a young student.

Between the ages of 14 and 18 Marie-Louise exhibited several of her portraits at the Paris Salon and at the Cecile Société Nationale de Beaux Artes.

When the family moved to London, Marie-Louise became more experienced in painting with watercolours and oils.  She was accepted for membership by the Society of Women Artists and awarded a prize by the prestigious Royal Amateur Art Society.

From 1917 after her marriage to Captain Gervas Pierrepont (later the fifth Earl Manvers), her work expanded and from this time her pictures reflect every aspect of her active and cosmopolitan life.

Her work has been hung in national galleries and exhibitions including the Royal Academy in London.

Marie-Louise moved to Thoresby Park in 1939 where she produced a series of affectionately observed and confidently painted interiors and watercolours of the estate in wartime. 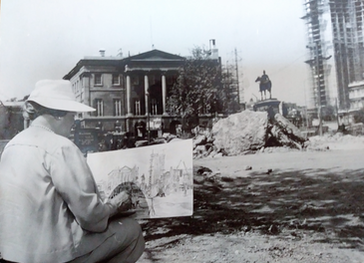 Countess Manvers working on a watercolour study near Hyde Park Corner in 1962. The completed work ‘Changing London, Hyde Park Corner’ can been seen in an exhibition at Holme Pierrepont Hall in 2018.