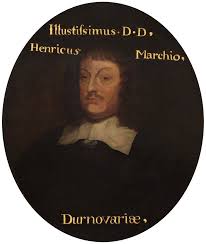 The eldest son and heir of Sir Robert Pierrepont, Henry was baptised at Mansfield and educated at Emmanuel College, Cambridge from 1624. Following his father's peerage in 1628, Henry was styled Viscount Newark.
He was elected as M.P. for Nottingham, and sat in the House of Commons from 1628-9. In January 1641 he was called to the House of Lords as Baron Pierrepont of Holme Pierrepont and was an active member on behalf of the King.
He was a leading member of the Nottinghamshire Commission of Array in 1642, raising money and troops for the Royalist cause, and served as Lord Lieutenant of Nottinghamshire in the same year. In 1643 he sat as a member of the King's Council of War and of the royalist Oxford Parliament. Appointed as a Privy Councillor in March 1644/5, on 25 March 1645 King Charles created him Marquess of Dorchester.
Following the King's defeat, in 1647 the Marquess compounded for his estates and was fined £7,467 for delinquency. He turned his attention to law and medicine. He was admitted to Gray's Inn in 1651 and took the bar the following year. His medical studies led to his becoming an honourable Fellow of the College of Physicians in 1658. His extensive and varied library was later bequeathed to the Royal College of Physicians. In 1663 he became a Fellow of the Royal Society.
On the Restoration in 1660, he once again became a Privy Councillor, and an active member of the House of Lords. He died in London in December 1680, upon which the Marquessate of Dorchester became extinct. He was succeeded as Earl of Kingston-upon-Hull by his great-nephew Robert Pierrepont. He was buried at Holme Pierrepont.
FamilyHe married 1stly Cecilia Bayning, daughter of the 1st Viscount Bayning (1613-1639), and 2ndly, in 1652, Catherine Stanley, daughter of the 7th Earl of Derby.
From his first marriage, he had: